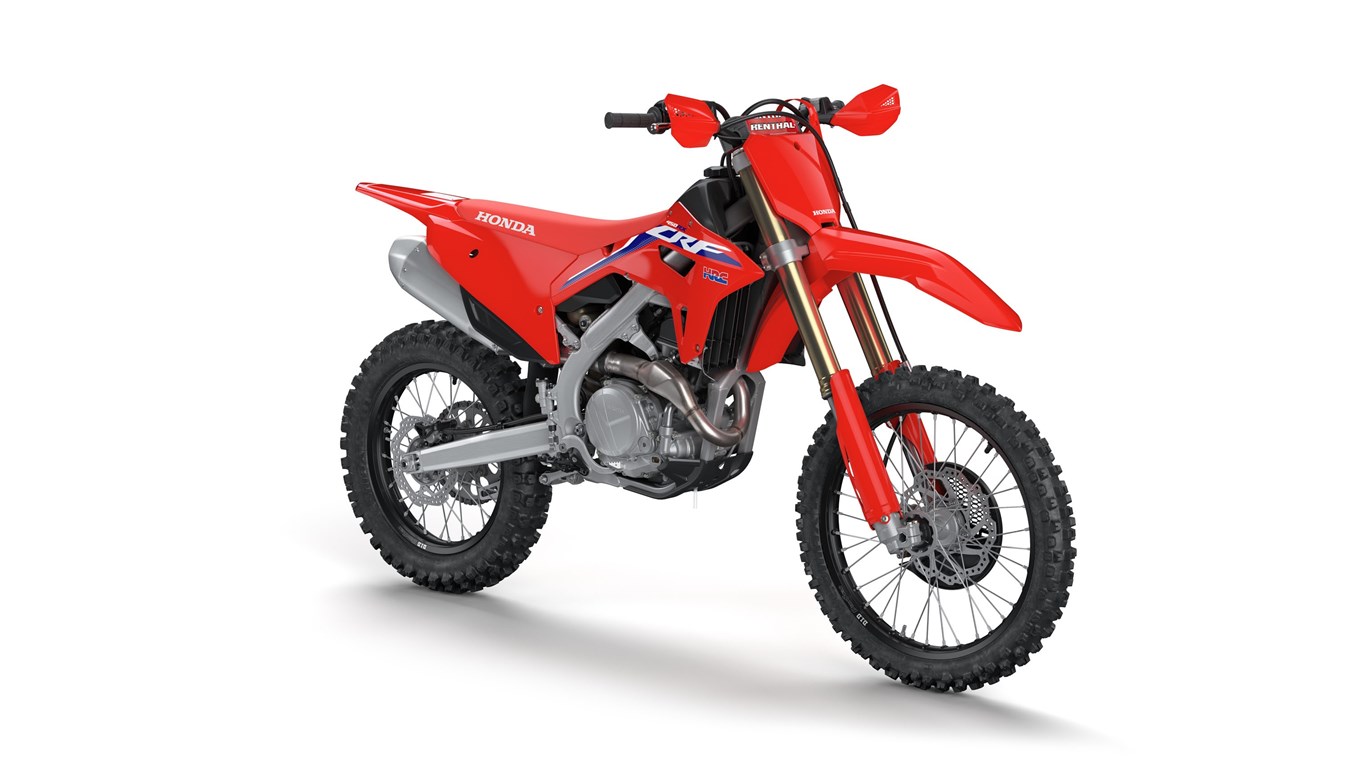 Like the CRF450R – every part of the CRF450RX is new for 2021, save for wheels and engine, with the comprehensive update benefiting directly from knowhow gained by the development of Tim Gajser and HRC’s 2019 championship-winning CRF450RW works machine. Its 2.3kg lighter and features a new frame and swingarm, plus changes to geometry and suspension, greatly improve cornering performance. The engine receives intake/exhaust upgrades, new decompression system plus single exhaust muffler to boost and smoothen low-mid-range driveability. A larger hydraulic clutch offers greater control with lighter lever pressure. More compact plastics and a smaller seat unit increase freedom of movement. Brush guards are now standard-fit and the sidestand tucks in more neatly for improved rider ergonomics.

For 17YM Honda introduced an all-new, competition-ready cross-country machine into its off-road line up – the CRF450RX. And it took as its rock-solid base the engine and chassis of the 17YM CRF450R – Honda’s first totally new 450cc motocrosser in eight years – with modifications including larger fuel tank,18-inch rear wheel, revised PGM-FI mapping and suspension changes.

The CRF450R was the perfect platform to expand on, and gave the CRF450RX both the pure MX DNA to deal with any enduro stage and the confidence-inspiring competence to handle flat-out trails, challenging climbs and tight, tricky sections with ease.

Development has mirrored the CRF450R, too. An HRC-developed cylinder head upped peak power and torque considerably in 19YM; HRC launch control was also added along with revised rigidity balance for the frame and swingarm, a new front brake caliper and adjustable-position Renthal Fatbar. For 20YM, just like its MX sibling, it received Honda Selectable Torque Control (HSTC).

21YM sees a major evolution for the CRF450RX. Starting from the exact same point as the 21YM CRF450R (which has been almost totally redesigned by HRC with developments taken directly from Tim Gajser’s 2019 MXGP championship-winning machine) it’s an even more formidable off-road weapon, devastatingly fast over the ground and, as importantly, with high build quality and reliability that makes it easy to live with over the years of ownership.

For 21YM, like its motocross sibling, the CRF450RX receives a wide array of improvements under a development theme of ‘The ultimate off-road weapon'. Firstly it’s 2.3kg lighter thanks to a revised frame and subframe. The new frame and swingarm’s rigidity balance, combined with tighter chassis geometry, heightened ground clearance and suspension changes, are all targeted at creating optimal cornering performance.

The engine also benefits from HRC’s knowhow to give a strong focus on low- to mid-range torque. The decompressor has been relocated, airbox volume is up, the throttle body redesigned and exhaust ports re-shaped. The exhaust downpipe is new and a single muffler replaces dual mufflers.

A larger-volume hydraulic clutch has an even lighter lever action, while other weight-saving details include a smaller fuel pump and optimised magnesium cylinder head cover. New plastics, too, are lighter and slimmer to aid rider freedom and the seat is a smaller unit, lower at the back. Brush guards are now standard fit and the sidestand tucks away more neatly. A smart new all-red graphic scheme completes this major update.

The CRF450RX’s twin-spar aluminium frame was unchanged in 20YM; for 21YM it is completely renewed – with direct input from the HRC race team – to elevate every aspect of cornering ability.

Thanks to narrower main spars, at 8.4kg it weighs 700g less than the previous design, while a redesigned subframe also saves 320g at 910g. The chassis dynamic is also new: while torsional rigidity is maintained, lateral rigidity has been reduced by 20% to increase corner speed, traction and steering accuracy. The aluminium swingarm has a new rigidity balance tuned to match the frame, with narrower arms and pivot point. The Pro-Link ratio is also revised.

Both top and bottom yokes are revised, with more flex, for quicker steering and feel. Fully adjustable, the 49mm Showa USD coil spring fork is a version of the Showa ‘factory’ fork supplied to MX race teams in the Japanese championship. With the target of improved, smoother cornering performance, the forks have been revalved, stroke lengthened by 5mm to 310mm and the axle clamps’ rigidity increased. The Showa rear shock’s main piston valving is enlarged for faster response and improved bump absorption. Its spring also uses the world’s lightest steel – to save 200g.

The damping/spring rate of both front and rear suspension are new for 21YM – and lower than the CRF450R – to suit a wider range of conditions and help with comfort over longer rides.

The seat is now shorter, lighter and 10mm lower at the rear, to aid the rider’s freedom of movement. It’s also much easier to remove and install. Maintenance is also easier, as the number of 8mm bolts securing the bodywork goes from 6 to 4 each side. The new machine is also slimmer by 70mm (50mm on the left, 20mm on the exhaust side), and the plastics thinner, while the tank cover has been removed.

Designed with Computational Flow Dynamics (CFD) for maximum through-flow of air, the radiator shrouds are constructed from one piece of plastic, rather than two and now include a lower vent while the radiator grills are optimised for airflow. Holding 8L the plastic fuel tank has also been redesigned.

Standard-fit, lightweight Renthal Fatbar flex for optimal comfort; the top yoke features two handlebar-holder locations for moving the handlebar rearward and forward by 26mm. When the holder is turned 180°, the handlebar can be moved an additional 10mm from the base position, resulting in four unique riding positions. When it comes to weight saving, small contributions accumulate (‘with enough dust, a mountain can form’ as the Japanese saying has it); with that in mind, balanced control cable wiring saves 100g.

New knuckle guards protect hands and levers and add just 222g total between them. The forged aluminium sidestand also now tucks in much closer to minimise interference while riding.

Up front, the twin-piston brake caliper employs 30 and 27mm diameter pistons and 260mm wave-pattern disc; along with low-expansion rate brake hose, it gives both a strong feel and consistent staying power. The single-piston rear caliper is matched to a 240mm wave-pattern disc.

DID aluminium rims, with directly attached spoke pattern layout are finished in black; the front is a 21 x 1.6in, the rear a 19 x 2.15in. The rear wheel is both stronger and lighter for 21YM and fitted as standard equipment are Dunlop’s bespoke enduro-ready Geomax AT81F/AT81 tyres: 90/90-21 front and 120/90-18 rear.

Having received a peak power boost of 1.8kW, plus 2Nm more torque and a stronger bottom-end for 19YM, in 20YM development of the 449.7cc four-valve Unicam engine centred around refinements and optimisation of the PGM-FI mapping and HRC Launch Control, plus the addition of Honda Selectable Torque Control. For 21YM the focus – with upgrades derived directly from Tim Gajser’s championship-winning HRC machine – is on drivability in the low to mid-range, and weight saving, further enhancing cornering performance.

A significant increase (up to 0.6kW) in peak power above 5,000rpm is accompanied by a stronger low-rpm torque feel, the result of an air box increased in size by 1.8L to 4.1L on the ‘clean’ side. The new air box – which can now be accessed simply with the removal of one side shroud bolt – feeds a redesigned, lighter 46mm throttle body, which optimises intake efficiency and makes active use of latent heat vaporisation in the inlet ports.

The injector angle, too has gone from 30° to 60°, spraying fuel all the way back to the butterfly to improve intake efficiency, cooling of the charge and all-important throttle feel. The decompression system is also new: its counterweight is moved from the right of the camshaft to the left, giving more stable operation at low rpm with increased stall-resistance.

The biggest change is to the twin exhaust ports: like the CBR1000RR-R Fireblade their exit is oval rather than round in shape for improved efficiency, and the 5.08 kg 2-1-2 exhaust design of the previous model has been replaced by a single 3.84kg downpipe and muffler (which also does away with a heat shield) saving a full 1.24kg. The downpipe also tucks in 74mm closer to the centre line (improving rider ergonomics) while the pressed muffler features twin resonators that reduce noise while boosting power.

One update drawn directly from Gajser’s bike is the addition of a hydraulic clutch. This improves both control and feel at the lever (it’s 10% lighter) as well as delivering consistent lever clearance under arduous riding conditions. The clutch capacity has been increased by 27% with an extra plate – from 7 to 8 – and works with an extra friction spring to maximise power transmission and durability. Slippage has been reduced by 85% at peak power.

Bore and stroke remains 96 x 62.1mm with compression ratio of 13.5:1. A gear position sensor allows the use of three specific ignition maps for 1st and 2nd, 3rdand 4th, and 5th.

Rock-solid reliability has always been a big factor in the CRF450RX’s success and a 5-hole piston oil jet and dual 12mm drum scavenge pump manage lubrication.

Saving more precious grams, the magnesium cylinder head cover has been redesigned with thinner material and the fuel pump made smaller – it secures with 4 bolts instead of 6, saves 120g and offers the same pressure and filter life as the previous design.

The CRF450RX gained HSTC in 20YM and the system is unchanged for 21YM. It works to minimise rear wheel spin (thus wasted forward drive) and maximise traction. It doesn’t use a wheel speed sensor, and critically maintains feel at the throttle while managing power; ignition timing is retarded and the PGM-FI controlled when the rate of change of rpm is detected to have gone over a set amount.

In Mode 1 the system intervenes most lightly, and after the longest time ­– useful for reducing wheelspin and maintaining control in tight corners.

Mode 3 has the system intervene more quickly and strongly, and is therefore useful in more slippery, muddy conditions.

Mode 2 naturally offers a mid-point between 1 and 3 in terms of speed and strength of intervention.

An obvious update for 21YM is the rider controls and display switchgear. The Launch Control indicator, EFI warning, EMSB mode button and LED indicator – are sited on the left handlebar, with HSTC button now incorporated.

Pressing and holding the HSTC button for 0.5s will cycle the system to the next mode, with a green LED indication – 1 blink for mode 1, 2 for mode 2 and 3 for mode 3 – to confirm selection.

The HSTC system can also be switched off completely. When the engine is turned on, the system uses the last-selected setting.

HRC Launch Control gives any rider the best option for a strong start and also has 3 modes to choose from:

The LED also displays mode selected, but with a blue light.

Gaining a 21YM mapping update the HRC Setting Tool can deliver a much more easy-going Smooth mode, with gentler throttle response for novice riders. It can also inject Aggressive mode with a hyper-sensitive throttle reaction and engine response for high-test race conditions.

All specifications are provisional and subject to change without notice.