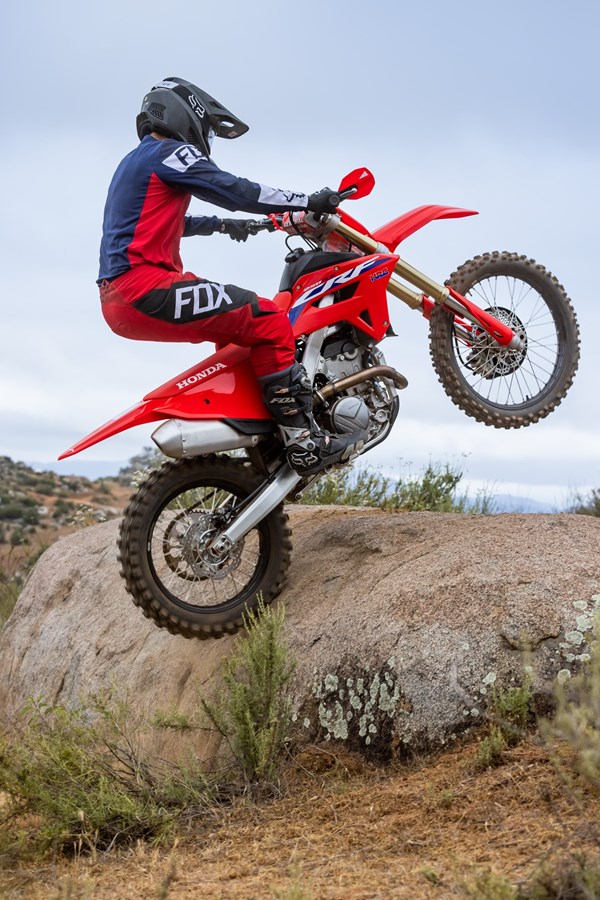 Model updates: The new CRF250RX is the strongest it’s ever been, inheriting the chassis of the 22YM CRF450RX, plus extensive cylinder head development producing a considerable low-rpm torque boost with enhanced reliability. New radiators improve efficiency, the clutch now has 9 plates and lighter lever feel, while the strengthened gearbox features revised ratios for improved ‘roll-on’ performance. The Showa suspension is re-valved for enhanced bump absorption, and knuckle guards are also standard fit.

And for the same model year, a cross-country option in the form of the new CRF250RX was added to the range, with off-road specific modifications drawn from the CRF450RX including larger fuel tank,18-inch rear wheel plus off-road specific engine mapping and suspension changes to ensure it was equally at home speeding up a root-strewn climb, or slicing precious seconds off an Enduro special test.

For 20YM it followed development of the CRF250R and gained a major low to mid-range power and torque boost, plus frame and swingarm of the 19YM CRF450RX. 22YM sees a major step forward for the CRF250RX, including chassis upgrades inherited from the 21YM CRF450R improving both ability and agility plus a boost in low-rpm torque for the engine.

Riders have always loved the CRF250R’s top-end power hit. To link up with the healthy mid-range, extensive revision to both intake and exhaust efficiency yields much-improved low-rpm drive; the ECU mapping is also revised optimising air/fuel mixture and ignition timing.

A great deal of work has also gone into enhancing high-rpm cam timing accuracy and long-term reliability. A 9-plate clutch and new ratios for the strengthened gearbox ensure none of the extra punch is wasted. For 22YM the CRF250RX also wears standard-fit knuckle guards.

For 22YM the CRF250RX is equipped with the same chassis that debuted on the 21YM CRF450RX. Alongside the punchier engine a 3kg weight saving, geometry changes and suspension upgrades cohere to create a package that’s easier to ride faster for longer.

Thanks to narrower main spars, the frame weighs 700g less than the previous design, while a redesigned subframe also saves 320g. The chassis dynamic is also new: while torsional rigidity is maintained, lateral rigidity has been reduced by 20% to increase corner speed, traction and steering accuracy. The swingarm pivot point has rib placement optimised; the aluminium swingarm has a new rigidity balance tuned to match the frame.

Both top and bottom yokes feature increased flex, to give sharper, more agile cornering and bump reaction. The CRF250RX’s suspension uses specific settings, with a broader performance range than the CRF250R. Fully adjustable, the 49mm Showa USD coil spring fork is a version of the Showa ‘factory’ fork supplied to MX race teams in the Japanese championship. With the target of smooth all-round action, the forks use have been re-valved, the stroke lengthened by 5mm to 310mm and the axle clamps’ rigidity increased to improve grip and rut ride-over ability.

The seat is now shorter, lighter and 10mm lower at the rear, to aid the rider’s freedom of movement. It’s also much easier to remove and install. Maintenance is also easier, as the number of 8mm bolts securing the minimal bodywork goes from 6 to 4 each side. The new machine is also slimmer by 70mm (50mm on the left, 20mm on the exhaust side), and the plastics thinner, while the tank cover has been removed.

Designed with Computational Flow Dynamics (CFD) for maximum through-flow of air, the radiator shrouds are now constructed from one piece of plastic, rather than two and include a lower vent while the radiator grills are optimised for airflow. They’re also 17mm narrower in width compared to the 21YM machine. The plastic fuel tank holds 8L.

Standard-fit, lightweight Renthal Fatbar flex for optimal comfort; the top yoke features two handlebar-holder locations for moving the handlebar rearward and forward by 26mm. When the holder is turned 180°, the handlebar can be moved an additional 10mm from the base position, resulting in four unique riding positions.

Up front, the twin-piston brake caliper employs 30 and 27mm diameter pistons and 260mm wave-pattern disc; along with low-expansion rate brake hose it gives both a strong feel and consistent staying power. The single-piston rear caliper is matched to a 240mm wave-pattern disc. New for 22YM knuckle guards now protect hands and levers while the forged aluminium sidestand tucks away neatly to minimise interference while riding.

The CRF250RX shares the 22YM engine of its motocross sibling for a fully-rounded performance throughout the rev-range – with the same peak power and low-rpm torque upgrade – but has new fuelling and ignition mapping to soften the power delivery for the wide-ranging conditions off-road riding presents.

Picking up earlier in the rev-range, power output is smooth and linear, while torque bulges at significantly lower rpm. Overall, there’s up to 10% more power and 15% torque across the rev range for fluid, same gear corner-to-corner over-rev.

The overall result? A big-hitting engine just got an even heavier hit, delivering strong, accessible drive from low down to make real use of the new chassis’ agility. And it’s the culmination of many improvements – some large, some small – that have upped performance.

Low-rpm combustion stability and gas flow in, and out, of the chamber served as main focus. Headlines are a revised air intake funnel and cone tube, fed by a 78% larger-capacity airbox, now 4.1L, an injector angle now set at 60° (rather than 30°) and a straight exhaust port. Air intake efficiency is improved, alongside air intake cooling. The air filter’s also easier to access.

A myriad of detailed improvements have gone into the top-end of the engine; the intake cam sprocket is now press-fit, saving weight with more accurate timing accuracy. Double springs for the intake valves (rather than single) give extra high-rpm control. The oil’s pathway to the camshaft journals has been modified, alongside a more rigid camshaft holder and head to reduce journal friction.

Valve timing has been optimised; precise re-alignment of the rocker arm shaft position aids high-rpm performance while the piston and connecting rod design maximise efficiency. Bore and stroke remains 79 x 50.9mm, with a 4.5mm cylinder offset to reduce friction and compression ratio of 13.9:1. The valves are titanium; 33mm inlet and 26mm exhaust. For greater off-road enduro riding performance, the FI settings have been remapped for smoother power delivery.

A single muffler replaces the dual mufflers of the 21YM design. The downpipe allows a straight shot for the spent gases; optimised internal dimensions enhance combustion stability and exhaust efficiency. Its compact nature also allows a slimmer body and saves 1.7kg over the previous design.

To cope with the extra heat generated by a harder-working engine the mounting angle and number of fins in the radiators have been adjusted, through fluid analysis, increasing the surface area by 2% and heat radiation by 6%. Redesigned shrouds generate extra airflow

Other 22YM developments build-in extra levels of reliability. The water pump gear is thicker to better deal with high-temperature oil. And to increase the flow of oil, the pressure to the cylinder head has been modified. A 5-hole piston oil jet maintains optimum piston cooling and ignition timing. The combined oil pump/drive gear is on the left hand side of the engine, with the oil filter and oil way on the right side – the oil’s path around the engine is short and straightforward and the oil also lubricates the clutch and transmission, with a total oil capacity of 1.35L.

The drivetrain has also received attention. To improve endurance, engagement feel and a lighter lever action the clutch gets an extra disc, to 9, spreading the load applied to the friction material. Also an additional friction spring in the damper chamber, optimised lubrication, friction materials and primary ratio – plus more rigid clutch centre – contribute to higher performance and a 21% increase in endurance. The operational load on the clutch lever is reduced by 4%.

To deal with the load applied by the new clutch, as well as maximise drive from any rpm point the gearbox – without adding weight – features a layout revised for extra strength. The ratios, too are adjusted with 1st taller, 2nd a little shorter, 3rd taller and 4th/5th shorter.

A new shift pattern uses one shift fork going up from 2nd to 3rd (rather than two) with two lead grooves rather than 3 and improved countershaft rigidity reduce friction. The result is a much better shifting feel between two critical gears; the shift drum is also 17% lighter. A gear position sensor allows the use of three specific ignition maps for 1st and 2nd, 3rd and 4th, and 5th.

HRC’s Launch Control system gives any rider the best option for a strong start and has 3 modes to choose from:

The rider controls and displays – engine stop button, EFI warning, EMSB mode button and LED indicator – are all sited on the left handlebar.

All specifications are provisional and subject to change without notice

Please note that the figures provided are results obtained by Honda under standardised testing conditions prescribed by WMTC. Tests are conducted on a rolling road using a standard version of the vehicle with only one rider and no additional optional equipment. Actual fuel consumption may vary depending on how you ride, how you maintain your vehicle, weather, road conditions, tire pressure, installation of accessories, cargo, rider and passenger weight, and other factors.